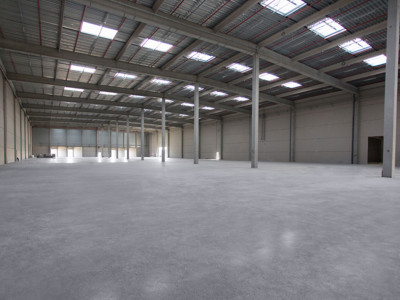 Wear and tear on an industrial concrete floor’s surface can have serious implications for the efficiency of the building. An uneven surface will make it more challenging for materials handling vehicles to operate, potentially increasing the wear to the vehicle itself.

In cases of serious damage the area may have to be isolated while repairs are undertaken. This can be costly, in terms of disruption to operations, as well as the actual cost of the repair itself.

Abrasion can be caused by the constant movement of materials handling vehicles over the surface; or by dragging items across the floor; or by impact damage caused by dropping objects on to the floor. Certain substances can also cause damage, often caused by the chemicals in the substance slowly disintegrating the concrete.

The benefit of a surface hardener

A surface hardener adds a protective layer to the concrete floor, reducing the amount of surface wear and tear caused by abrasion.

This helps to extend the life of the concrete floor, reduce repair costs, minimise disruption, and keep the floor’s smart appearance for years.

Tests to measure the abrasion resistance of a floor’s surface are described in parts 3, 4 and 5 of EN 13892.

Another test, the Capon abrasion test originally developed for ceramics, also follows a similar principle. In this example below, the top sample can be considered to provide better abrasion resistance than the bottom sample, as less surface material has been worn away. 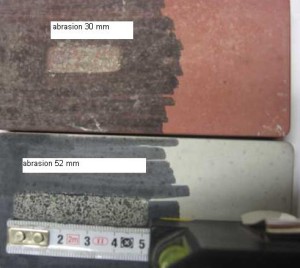 The unregulated Taber test uses weight to draw similar conclusions. The test sample is weighed before and after the abrasion test is carried out, and the difference in the weight indicates the amount of surface material removed, and hence its abrasion resistance.

The Boehm result for concrete without a surface hardener is 9cm3/50cm2 – which means that the test indicated that in a large scale industrial floor 9cm3 of surface material would be worn away per 50m2 of the floor’s surface. Hence this is the benchmark figure that a surface hardener should improve upon.

So by adding a Rocland surface hardener the abrasion resistance of the concrete floor can be significantly improved, helping to lengthen the life of the floor and reduce operational and repair costs.